He that was greater than all who are born of women, the Prophet who received God's testimony that he surpassed all the Prophets, was born of the aged and barren Elizabeth (Luke 1: 7) and filled all his kinsmen, and those that lived round about, with gladness and wonder. But even more wondrous was that which followed on the eighth day when he was circumcised, that is, the day on which a male child receives his name. Those present called him Zacharias, the name of his father. But the mother said, "Not so, but he shall be called John." Since the child's father was unable to speak, he was asked, by means of a sign, to indicate the child's name. He then asked for a tablet and wrote, "His name is John." And immediately Zacharias' mouth was opened, his tongue was loosed from its silence of nine months, and filled with the Holy Spirit, he blessed the God of Israel, Who had fulfilled the promises made to their fathers, and had visited them that were sitting in darkness and the shadow of death, and had sent to them the light of salvation. Zacharias prophesied concerning the child also, saying that he would be a Prophet of the Most High and Forerunner of Jesus Christ. And the child John, who was filled with grace, grew and waxed strong in the Spirit; and he was in the wilderness until the day of his showing to Israel (Luke 1:57-80). His name is a variation of the Hebrew "Johanan," which means "Yah is gracious." 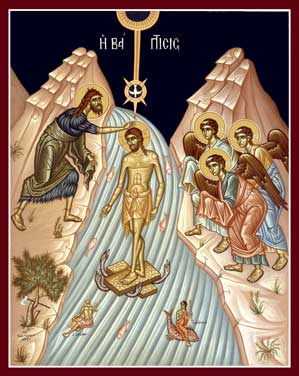 The divine Baptist, the Prophet born of a Prophet, the seal of all the Prophets and beginning of the Apostles, the mediator between the Old and New Covenants, the voice of one crying in the wilderness, the God-sent Messenger of the incarnate Messiah, the forerunner of Christ's coming into the world (Esaias 40: 3; Mal. 3: 1); who by many miracles was both conceived and born; who was filled with the Holy Spirit while yet in his mother's womb; who came forth like another Elias the Zealot, whose life in the wilderness and divine zeal for God's Law he imitated: this divine Prophet, after he had preached the baptism of repentance according to God's command; had taught men of low rank and high how they must order their lives; had admonished those whom he baptized and had filled them with the fear of God, teaching them that no one is able to escape the wrath to come if he do not works worthy of repentance; had, through such preaching, prepared their hearts to receive the evangelical teachings of the Savior; and finally, after he had pointed out to the people the very Savior, and said, "Behold the Lamb of God, Which taketh away the sin of the world" (Luke 3:2-18; John 1: 29-36), after all this, John sealed with his own blood the truth of his words and was made a sacred victim for the divine Law at the hands of a transgressor. 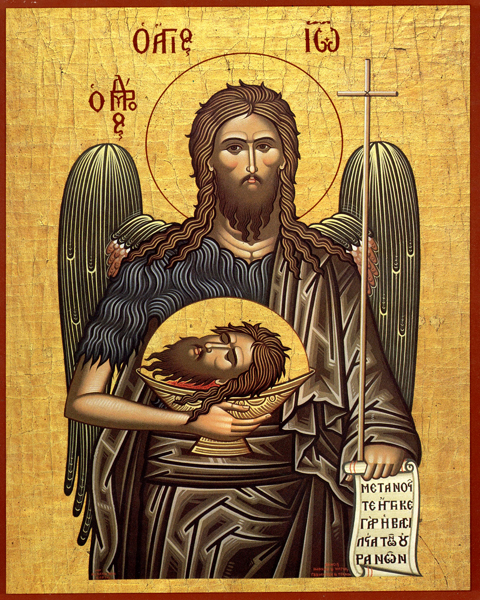 This was Herod Antipas, the Tetrarch of Galilee, the son of Herod the Great. This man had a lawful wife, the daughter of Arethas (or Aretas), the King of Arabia (that is, Arabia Petraea, which had the famous Nabatean stone city of Petra as its capital. This is the Aretas mentioned by Saint Paul in II Cor. 11:32). Without any cause, and against every commandment of the Law, he put her away and took to himself Herodias, the wife of his deceased brother Philip, to whom Herodias had borne a daughter, Salome. He would not desist from this unlawful union even when John, the preacher of repentance, the bold and austere accuser of the lawless, censured him and told him, "It is not lawful for thee to have thy brother's wife" (Mark 6: 18). Thus Herod, besides his other unholy acts, added yet this, that he apprehended John and shut him in prison; and perhaps he would have killed him straightway, had he not feared the people, who had extreme reverence for John. Certainly, in the beginning, he himself had great reverence for this just and holy man. But finally, being pierced with the sting of a mad lust for the woman Herodias, he laid his defiled hands on the teacher of purity on the very day he was celebrating his birthday. When Salome, Herodias' daughter, had danced in order to please him and those who were supping with him, he promised her -- with an oath more foolish than any foolishness -- that he would give her anything she asked, even unto the half of his kingdom. And she, consulting with her mother, straightway asked for the head of John the Baptist in a charger. Hence this transgressor of the Law, preferring his lawless oath above the precepts of the Law, fulfilled this godless promise and filled his loathsome banquet with the blood of the Prophet. So it was that that all-venerable head, revered by the Angels, was given as a prize for an abominable dance, and became the plaything of the dissolute daughter of a debauched mother. As for the body of the divine Baptist, it was taken up by his disciples and placed in a tomb (Mark 6: 21 - 29).

Saint John's feast day is on Agugust 29, and is a day of scrict fast as we commerate the Beheading of the Holy and Glorious Prophet, Forerunner and Baptist John.  His nativity is celebrated on June 24th and on Januray 7th We celebrate Synaxis of John the Holy Glorious Prophet, Baptist, & Forerunner.

Apolytikion in the Fourth Tone
O Prophet and Forerunner of the presence of Christ, we who fervently honor you cannot worthily praise you. For by your revered and glorious birth the barrenness of your mother and the muteness of your father were unbound, and the incarnation of the Son of God is proclaimed to the world.

Kontakion in the Third Tone
She that once was barren doth today bring forth Christ's Forerunner, John, the culmination and the crown of all the Prophets. For when he, in River Jordan, laid his hand on Him Whom the Prophets preached aforetime, he was revealed as God the Word's fore-chosen Prophet, His mighty preacher, and His Forerunner in grace.

Apolytikion in the Second Tone
The memory of the just is celebrated with hymns of praise, but the Lord's testimony is sufficient for thee, O Forerunner; for thou hast proved to be truly even more venerable than the Prophets, since thou was granted to baptize in the running waters Him Whom they proclaimed. Wherefore, having contested for the truth, thou didst rejoice to announce the good tidings even to those in Hades: that God hath appeared in the flesh, taking away the sin of the world and granting us great mercy.

Kontakion in the Plagal of the First Tone
The glorious beheading of the Forerunner was a certain divine dispensation, that the coming of the Saviour might also be preached to those in Hades. Let Herodias lament, then, that she demanded a wicked murder; for she loved not the Law of God, nor eternal life, but one false and fleeting.