The first Greek Orthodox Community in Suffolk sprang from the greater Greek War Relief movement. The local chapter, founded in 1940, was used after the war as a base to "kick off" the fundraising efforts that would be needed to build a church. After considering properties in Patchogue, Ronkonkoma and Bay Shore, the parcel in Blue Point, where the Church now stands, was found and the contract to purchase the 12 acres for $12,000 was signed on September 13, 1950. Forty families lived in the area. It was decided to build a small, temporary church, with plans for a future Byzantine Church.  Contract was signed on October 20, 1952 with Aristodemus Bouyukas of Farmingville as the builder for $23,800.

Since 1951, weekly church services had been held in St. Mary's Episcopal Church in Lake Ronkonkoma and in other churches in Patchogue. The first priest was the Theologian Amfilophios Sarantides, soon succeeded by Fr. Artemios Mandakas. Opening ceremonies were held on April 13, 1953 and the first wedding took place in a bare church with an Iconostasis but no pews.  The Philoptochos had been active since October 1951.

The naming of the church took place on October 4, 1953 at a huge celebration attended by over 300 people. The Church was dedicated to Saint John the Baptist.  In that same month, Fr. Mandakas began to hold services in the Huntington area as an outreach. Parishioners in that area launched a drive to buy a "small church, parsonage and garage on Fairground Avenue and Second Street" for $25,000, with St. John's community contributing the down payment of $2,500. Thus, the second Greek Orthodox community in Suffolk County, St. Paraskevi, was established as an offspring of St. John's.

A former Navy Chaplain, Fr. Constantine Theodore, arrived in 1959. He and Presbytera Tina saw, as their top priority, the building of a Cultural Center. Groundbreaking took place in 1961. Father Theodore's pastorate was marked by an ecumenical spirit. He reached out to the greater community and held weekly services for eastern Long Island residents in Riverhead.

St. John's enjoyed heightened visibility and respect in the local community. In 1964, our community acquired additional property to the west and in 1967 to the east, and thus expanded and "squared out" the existing site. In 1967, another first for St. John's, Mary Filou was the first woman to serve as president of a Parish Council in the history of Hellenic Orthodoxy. 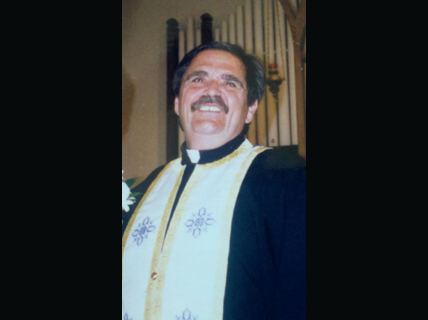 A resurge of activity and plans for a new Byzantine structure began with Fr. John Kefalas, who came to the community on October 15 1978 and displayed remarkable organizational ability. His leadership abilities helped the community realize its goals. A disastrous fire, with over $100,000 damage to the Cultural Center in November 1980, did not extinguish the dreams. Ground-breaking took place on January 25, 1981. Modeled after an 11th-century Byzantine church in Italy, the new edifice took shape in the shadow of the original structure, which was razed in 1984. The cornerstone, key artifacts and historically significant icons, were preserved for posterity. The “Grand Door Opening" ("Thiranixia") ceremonies of the "new" St. John's took place on May 1-2, 1982, presided over by His Eminence Archbishop Iakovos. During the 80's the church's embellishment became top priority. Major purchases were carpeting, pews, (donated by many parishioners) and the beautiful and impressive “Ikonostasio”, specially designed for St. John's, fabricated entirely of authentic Italian marble and shipped here piece-by-piece. Donated by the Philoptochos, it was so special that the designer, a well-respected Italian stone artisan, came to Blue Point with his crew of expert craftsmen to assemble it. Two matching pieces soon followed: the Baptismal Font and the Holy Altar, along with the other beautiful aspects of the church's interior always draws admiration.

After much research, the well known iconographer George Fillipakis was selected for the

art which would dominate the interior of the church, and work began on the Ikonostasio. 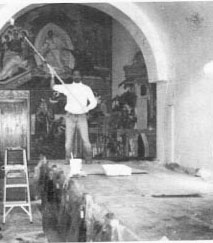 The 1980's and early 1990's were a period of economic hardship. We were strangled not only by a new monthly mortgage, but also by a church edifice in desperate need of restoration. Finally in 1995, thanks to the hard work and dedication of then President of the Parish council Jerry Devlopoulos, of blessed memory, and Harry, Billy and Angelo Stavropoulos we were able to pull through the tough times and started efforts to restore the church building. On Holy Week, 1995, we entered into our newly restored church and marveled at the dry walls with out chafing. What a wonderful way to celebrate our Lord's Resurrection On May 18, 1995, Fr. John was elevated to the rank of Protopresbyter by Archbishop Iakovos, an honor,' not only for him but the Parish as well. 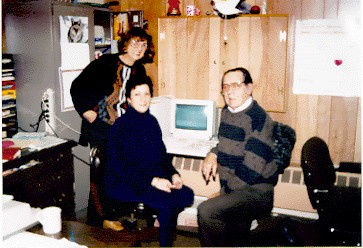 At the General Assembly of December 1996, Father John proposed a course which would lead the Parish to its Church Consecration. All present unanimously agreed. In November of 1997, Helen Kohilakis, Consecration Chairman, Bonnie Mina, Co-chair, Stavros Dalambakis, B.O.T. Vice-President and Father John ventured to the seminary in Boston where they were shocked when informed of the magnitude of the event, the items which must be purchased, and the different music that must be learned. Committees were formed and parishioners were eager to help. Father John left for Greece in order to purchase 35 necessary items. 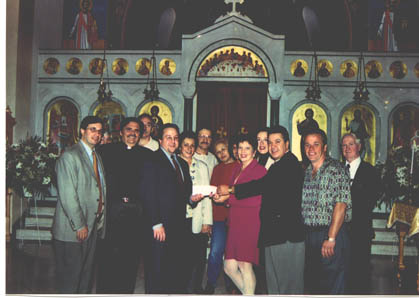 Archbishop Spyridon officially informed us that he would Consecrate our Church on the weekend of April 25 and 26, 1998 and on that date, he and Archdeacon Elias Villis placed the relics of St. Panteleimon, St. Kyrikos and the 38 Holy Fathers Martyred in Mt. Sinai at Raitho in the Crypt which was dug in the middle of the Altar Table. Along with the relics, some 12,000 names of relatives and friends both living and deceased were placed in the Crypt. All present added a drop of olive oil to the vigil lamp which now is an eternal flame on the Altar.

On April 8, 2012 the community of Saint John’s was devastated after the passing of our beloved Father John and that Holy Week and Pascha celebration proved to be one of the most difficult times in our church’s history.  Through the love and faith of our parish members, the board and Father Evagoras Constantinides we came together not only in mourning but in celebration of Father John’s legacy to our community.

On August, 2012 our parish and community was blessed with the arrival of our new Proistameno Father Andrew Cadieux and his wonderful family!!  Father Andrew represents a new chapter in the life of our community, one where we cherish our past, but also continue our journey into the future with faith, love, humility, compassion, hard work and vigilance, all for the love of our Lord and Savior Jesus Christ. 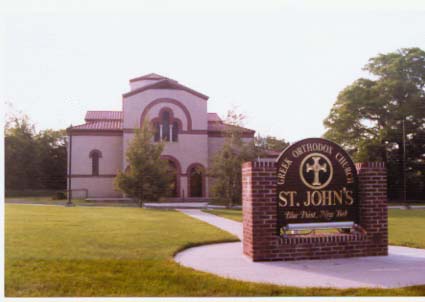